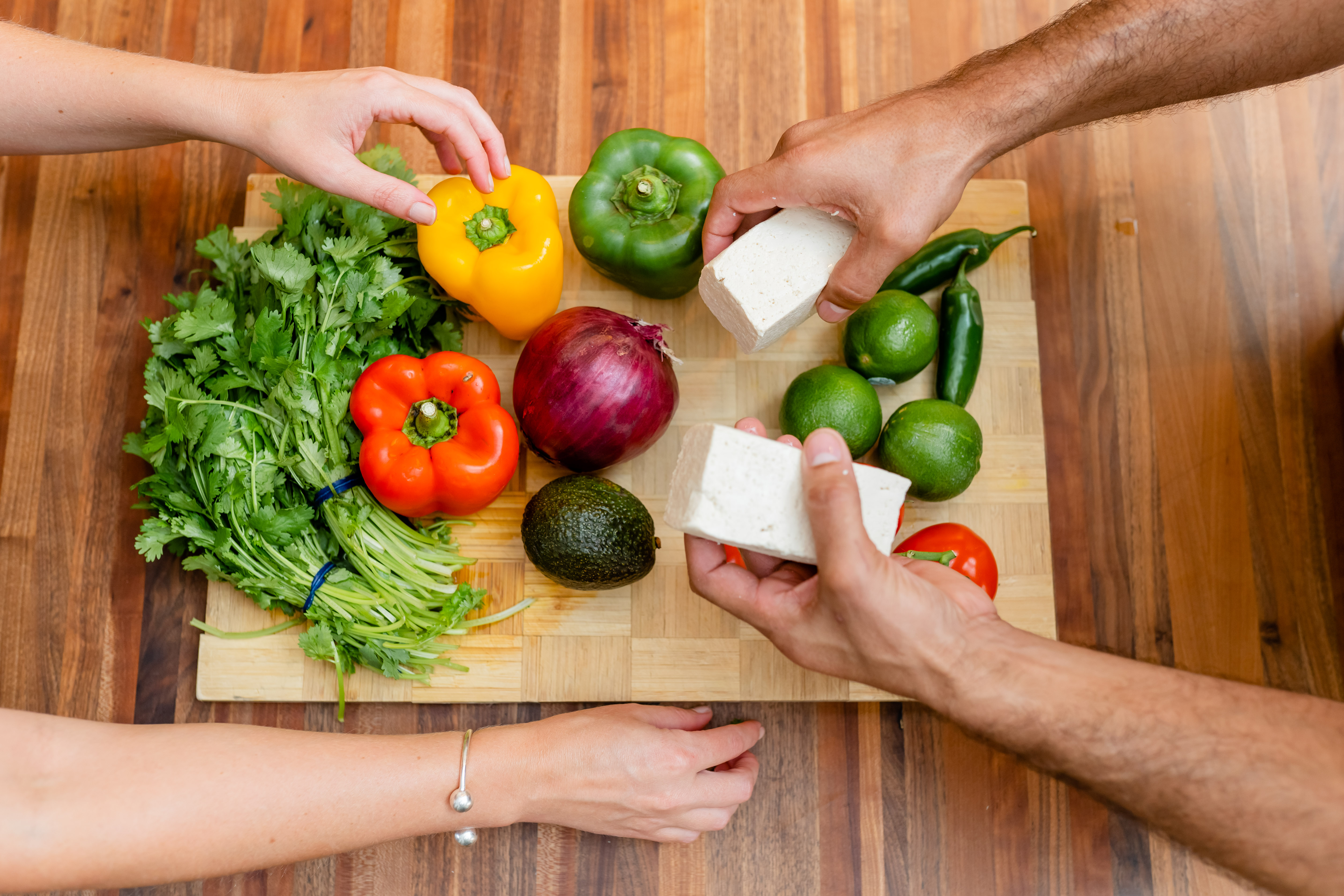 ROLE OF SOYFOODS IN PLANT-BASED DIETS

Soyfoods can contribute valuable nutrition to plant-based diets, such as flexitarian, vegetarian and vegan, while also providing important health benefits. They can be important sources of fiber, protein, essential fats, and minerals including calcium, iron, and potassium.1-3 In addition to their rich nutrient profile, soyfoods provide dietary components, such as isoflavones, which are found in negligible amounts in other plant foods.4

High fiber intake is a hallmark of vegetarian and, especially, vegan diets. Intake among vegans is on average 50% higher than non-vegetarians.5,6 The higher intake is an important advantage of plant-based eating patterns since fiber is 1 of 9 shortfall nutrients identified by the Dietary Guidelines panel. Fiber is also considered a nutrient of public health concern because underconsumption is linked to adverse health outcomes.7

Soyfoods as a Source of Protein in Plant-Based Diets

Although animal foods provide about 2/3 of the total protein intake of Americans,8,9 findings from the Adventist Health Study-2, show that vegan protein intake is only slightly lower than that of non-vegetarians (13.6% vs 14.7% of total calories).5

However, there is considerable debate about protein requirements for certain population groups including concerns that current recommendations may be too low for some.10-14 In particular, older people may need to consume 50% more protein than the Recommended Daily Allowance (RDA) to prevent or slow the loss of muscle mass that typically occurs with aging.15 These issues are of particular concern in plant-based diets since vegans may have slightly higher protein needs than meat eaters; largely due to the lower digestibility of protein from plant foods.16

Many experts recommend that vegans consume approximately 10% more protein than meat eaters.17 Because lysine is the limiting essential amino acid in vegan diets, it is important for vegans to consume at least 3 servings/day of legumes, a food group that includes beans, peanuts, and soyfoods. Traditional Asian soyfoods provide approximately (see table), making them among the best sources of protein in vegetarian diets. Furthermore, the quality of protein in soy protein isolate and soy protein concentrate, which is used in many plant-based meats, is similar to the quality of animal protein and greater than that of all other plant proteins.16,18,19 Although vegans and vegetarians can meet protein needs without consuming soyfoods, their rich protein content and high protein quality make these foods valuable for those with higher protein needs such as older vegans, athletes, and those on weight reduction diets.

Meat is an important source of minerals iron and zinc in typical American diets. Dairy foods also provide zinc. Iron deficiency is a public health concern seen most often in young toddlers and, to a greater extent, in premenopausal and pregnant women. Most legumes are rich in iron, but like all plants, they contain only nonheme iron which has much poorer bioavailability than the heme iron found in meat.

Several dietary factors affect nonheme-iron absorption; of these, the presence of phytate in legumes, whole grains, nuts, and seeds is most important.20 Because of less bioavailability of iron from plant-based diets, the Institute of Medicine (IOM) (now called the Health and Medicine Division) established a RDA for vegetarians that is 1.8 times the RDA for the general population.21 Although phytate also impacts absorption of zinc, the IOM has not established a separate RDA for zinc for vegetarians. In contrast, the European Food Safety Authority specifies zinc requirements that are based on 4 different phytate intakes: 300, 600, 900, and 1,200 mg/day.22

Despite the long-standing belief that phytate negatively impacts mineral nutrition, there is some debate about its practical impacts for mineral absorption. In comparison to long-term studies, the acute studies that have been used to ascertain bioavailability have been shown to exaggerate the impact of inhibitors such as phytate on the absorption of nonheme iron.23 This observation also appears to be true for zinc.24 Recent research suggests that25 habitual consumption of a high-phytate diet can reduce the inhibitory effect of phytate on nonheme-iron absorption.26

Despite these findings, there remains considerable evidence that vegetarians have iron stores that are lower than those of meat eaters, albeit generally within recommended ranges.27,28 This finding is true despite having comparable or greater iron intakes than the  general meat-eating population. Dietitians who counsel vegetarian and vegan clients should help individuals identify iron-rich foods, and also provide education on the importance of consuming vitamin C-rich foods at meals to enhance absorption.

There is evidence that the iron in soybeans may not be impacted by phytate to the extent that would be expected. Much of the iron in soybeans is present as ferritin, a form of iron that may be resistant to inhibitors of iron absorption like phytate. 29-31 This may make soyfoods valuable for meeting iron needs in plant-based diets, but it is an area where more research is needed before reaching definitive conclusions.

Soyfoods are relatively low in zinc and it is unclear whether there is adaptation to the effect of phytate on zinc absorption. Zinc absorption from soy is about 25% lower than from animal foods.32 Based on current observations, while soyfoods can make small contributions to zinc intake of plant-based diets, they are not an important source of this mineral.

Despite their relatively high content of phytate and oxalate, calcium bioavailability from calcium-set tofu33 (tofu made by coagulating soymilk with a calcium salt) is similar to absorption from cow’s milk. For soymilk, however, bioavailability varies according to the type of fortificant used. Calcium bioavailability is similar to cow’s milk when calcium carbonate is used,34 but is about 25% lower when the fortificant is tricalcium phosphate.34,35 Some soymilk brands use a mixture of the 2. Others are fortified at levels exceeding the 300mg found in a serving of cow’s milk. In this case, despite the lower fractional absorption that occurs with higher doses of calcium, the absolute amount of calcium absorbed is equivalent to or greater than that from cow’s milk.34

Most soymilk is also fortified with vitamin D, typically ergocalciferol, or vitamin D2, which is vegan. Plant forms of vitamin D3 or cholecalciferol are now also available, but less commonly used. There has been a long running debate about the relative potency of these 2 forms of the vitamin.36 A pharmacological dose of vitamin D3 is more potent than a similar dose of vitamin D2,36 but the extent to which these forms of the vitamin differ at typical dietary intakes is less clear. The most recent findings show that37 a daily supplement of 15mcg vitamin D (the current recommended intake), as either D2 or D3 significantly increased serum 25-hydroxyvitamin D levels compared to baseline, but vitamin D3 supplementation increased levels to a greater extent.

Potassium is another nutrient important for bone health. According to data from the National Health and Nutrition Examination Survey (NHANES) 2003-2006, cow’s milk contributes approximately 10% of the total intake of Americans.38,39 While legumes play a smaller role in American diets, they can contribute significant amounts of this mineral to plant-based diets. All legumes, including soybeans, are good sources of potassium.40,41 Soymilk derived from the whole soybean provides approximately 200-300 mg/cup, with the higher end of the range being similar to cow's milk. Other plant milks are much lower in potassium.42,43 Little is known about potassium bioavailability44 although 1 dose-response trial found that humans absorb about 94% of potassium gluconate in supplements, which was similar to the absorption rate of potassium from potatoes.45

Soybeans are very high in fat relative to other legumes and soyfoods46 and provide both essential fatty acids, the omega-6 fatty acid linoleic acid and the omega-3 fatty acid alpha-linolenic acid (ALA).47 In contrast to traditional Asian soyfoods, unless additional fat is added, soyfoods made with soy protein isolate or concentrate are very low in fat.

Approximately 60% of the fat in soybeans is polyunsaturated.47 When replacing saturated fat, soybean oil has been shown to reduce blood cholesterol levels,48 an attribute recently formally recognized by the U.S. Food and Drug Administration (FDA) in the form of a qualified health claim.49

The essential fatty acid ALA can be converted to the long chain omega-3 fatty acids eicosapentaenoic acid (EPA) and docosahexaenoic acid (DHA), but it’s not clear that the conversion is sufficient to appreciably increase circulating and tissue levels of these fats.50 Since these fats are found primarily in certain fish, it is probably more effective for vegetarians to take EPA and DHA supplements derived from microalgae rather than to rely upon ALA for this purpose.

Beyond Nutrients: Soyfoods and Health

Soyfoods are uniquely rich sources of isoflavones which are largely lacking in diets that don’t include these foods. Isoflavone intake of people in Japan is approximately 40mg/day51 compared to just 3mg/day in the United States.52

Isoflavones have been posited to reduce risk of both breast53,54 and prostate55 cancer, although most data come from case-control rather than cohort studies. Also, evidence suggests that for protection against breast cancer, soy consumption must occur during childhood and/or adolescence.56-58 Among postmenopausal women, isoflavones may alleviate hot flashes59 and improve bone health.60

Soy protein has been shown to lower circulating low-density-lipoprotein cholesterol (LDL-C) levels. The U.S. FDA set 25g/day as the threshold intake required for cholesterol reduction. Meta-analyses suggest that the reduction is approximately 4%,61-63 which in theory can over time reduce risk of developing coronary heart disease by 4-8%.64 Furthermore, when soyfoods are added to the diet, because the polyunsaturated fat content increases, there will likely be a significant drop in LDL-cholesterol levels.65,66

In conclusion, soyfoods possess many nutritional and health attributes that make them particularly valuable to consumers who wish to consume more plant protein. Because of the wide range of soyfoods available, they are relatively easy to incorporate into diets.

Mark Messina, PhD, MS, is the co-owner of Nutrition Matters, Inc., a nutrition consulting company, and is an adjunct professor at Loma Linda University. His research focuses on the health effects of soyfoods and soybean components. He is chairman of The Soy Connection Editorial Board and executive director of the Soy Nutrition Institute.
About The Author:

Virginia Messina, MPH, RD, is the co-owner of Nutrition Matters, Inc., a nutrition consulting company, and is an adjunct professor at Loma Linda University. His research focuses on the health effects of soyfoods and soybean components. He is chairman of The Soy Connection Editorial Board and executive director of the Soy Nutrition Institute.