In 2005, Monash University in Australia proposed a hypothesis that described grouping dietary short-chain carbohydrates that are slowly absorbed in the small intestine or are non-digestible due to inactivity or lack of enzymes, for an approach in the management of symptoms in irritable bowel syndrome (IBS). Since then, there has been a considerable amount of research across the world aimed at understanding naturally occurring fermentable oligosaccharide, disaccharide, monosaccharide, and polyols (FODMAPs), including efficacy, mechanisms, risks, and applications.

The strength of research supporting specific FODMAP-induced gut symptoms has led to the low FODMAP diet being incorporated into local and international clinical guidelines, including the National Institute for Health and Clinical Excellence guidelines for IBS management in primary care in the U.K. and as second line intervention for the British Dietetic Association guidelines.1 The diet‘s popularity has extended beyond the science and clinical world, with bloggers and self-proclaimed health gurus claiming it can treat everything from acne to weight loss. There are increasing numbers of FODMAP cookbooks, online “FODMAP friendly” stores and “FODMAP safe” or “FODMAP certified” products identified by both specialized and major brands.

What are FODMAPs and Where are they Found?

Table 1 provides an overview of the key FODMAP groups and some of the common foods in which they are found. The development of techniques to quantify the FODMAP content of foods has greatly advanced our understanding of food composition, food processing techniques (i.e., pickling and canning reduce FODMAP content), and ingredient selection. There are now several mobile health technologies or smart phone applications that detail food lists. One recommended, patient-friendly program, that translates evidence and uses scientific measurement is led by the FODMAP creators, Monash University in Australia.2 This application has established the most comprehensive global FODMAP database and includes traffic light food lists.

FODMAPs vary in absorptive capacities. Some FODMAPs are partially absorbed by some people (i.e., fructose, lactose, and polyols) and others are malabsorbed by all humans (i.e., fructo-oligosaccharides [fructans] and galacto-oligosaccharides [GOS]). This varied absorption highlights individualized sensitivity to each of the FODMAPs. The absorptive processes and the effects of digestion3 per FODMAP are summarized in Table 2.

Table 2. Classification of Main FODMAPs and their Small Intestinal Absorption

The magnitude of evidence for the clinical efficacy of the low FODMAP diet has surpassed any other dietary intervention for IBS (except for probiotics) and is now supported by a large number of published trials, systematic reviews, and guidelines. More than 10 randomized controlled trials or randomized comparative trials of the low FODMAP diet report improvements in overall gastrointestinal (GI) symptoms, especially abdominal pain and bloating for patients with IBS. Meta-analyzing the data from these trials shows a diet low in FODMAPs provides an adequate response rate of 50-80% in IBS symptoms.4,5

Studies have shown symptom severity scores in IBS subjects are more than halved when following the low FODMAP diet. Symptom resolution is shown almost immediately, but the greatest symptom control is achieved and maintained after 7 days of the low FODMAP diet.6 Furthermore, these effects have been shown in patients of all IBS subtypes (i.e., those with diarrhea, constipation, or mixed in their dominating symptom); especially notable is the improvement in stool consistency satisfaction.

What are the Mechanisms?

More recently, the upper GI motility response to FODMAPs has been investigated, highlighting that FODMAPs may contribute to upper GI symptoms due to gastroduodenal and gastro-colonic interactions.10 Psychosocial morbidities are known to be associated with increased levels of postprandial GI symptoms, whereas FODMAPs may affect extra-intestinal symptoms via gut-brain signaling secondary to the development of GI symptoms.

Why Doesn’t Everyone Experience Symptoms from FODMAPs?

The normal colon relaxes and accommodates gas without causing symptoms. While healthy subjects seem able to tolerate large gas loads, patients with functional GI disorders are less likely to do so. This observation was demonstrated in a study where, despite MRI analysis showing similar changes in small and large bowel contents following FODMAP challenges, only IBS patients (not healthy subjects) reached symptom thresholds.9 The individualized threshold at which increased water or gas provokes symptoms varies, largely depending on severity of visceral hypersensitivity, which is influenced by lower pain thresholds, higher somatisation, gut motility, stress, and type and dose of FODMAP consumed. Other proposed models to explain reduced pain thresholds or impaired motility feedback mechanisms in IBS include: the role of altered short-chain fatty acid sensing; bacterial overgrowth, decreased expression or sensitivity of sweet taste receptors; or alterations in GLUT5 expression that may all lead to increased release of hormones (cholecystokinin [CCK], glucagon-like peptide 1 [GLP-1]) known to alter intestinal motor activity or transit.11

Implementation of the Low FODMAP Diet

A medical practitioner should be consulted before implementing any dietary change to ensure necessary investigations of hidden pathological causes are ruled out. For example, IBS-like symptoms can occur in other more serious conditions including celiac disease or inflammatory bowel disease. The low FODMAP diet should then be overseen by an experienced gastroenterology dietitian who understands FODMAP evidence including composition data, dose effects, and common potential nutritional problems.

The protocol for implementation follows a 3-phase approach (see Table 3). First, total FODMAP reduction for 2-6 weeks; second, re-challenge to assess tolerance; third, long-term maintenance.12 This dietitian-delivered education should allow for personalization and education on FODMAP principles including ways to “switch“ high FODMAP-containing foods with low FODMAP foods. At review, re-challenge education should be given based on symptom response with the aim of long-term management of good symptom control and expansion of the diet. Comprehensive counseling and suitable educational resources are considered to have a positive association with adherence. An understanding of food processing can support ingredient label reading and provide tips for flavor enhancement while reducing FODMAP content (i.e., soaking and rinsing of legumes or using only the greens from spring onions).

Studies have shown that at long‐term follow‐up (i.e., between 6 and 18 months), patients often continue an “adapted FODMAP“ diet, meaning they reduce intake of only fructans and free fructose. Of those patients, 57% report satisfactory symptom relief compared to their habitual diet.13 This result highlights that fructans, in particular, are considered a key FODMAP trigger in the longer-term maintenance of FODMAP diets. 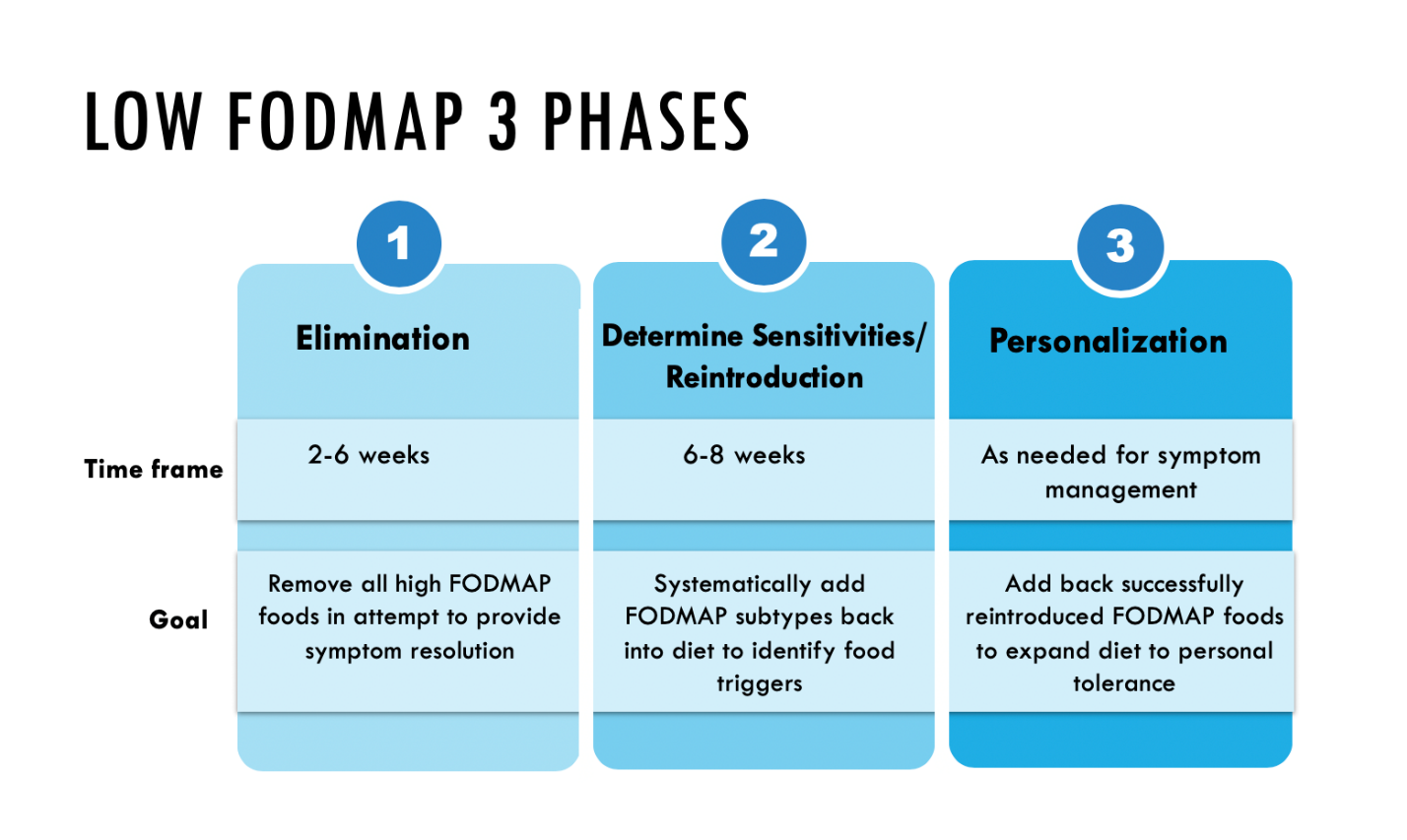 There are a number of challenges with the low FODMAP diet. It can alter the gut microbiota, impact nutrient intake, be complex to understand, and require adequate clinical support. In addition, not all patients will respond.

Many FODMAPs have prebiotic actions (especially fructans, inulin, and GOS) which have diverse health benefits including immune modulation, production of short-chain fatty acids, and maintenance of epithelial integrity. Therefore, an alteration in the gut microbiota may be expected in those consuming the low FODMAP diet. Several studies using heterogenous methods have examined the effect of the low FODMAP diet on gut microbial communities. Consistent findings have emerged including reductions in Actinobacteria and relative abundance of the genus Bifidobacteria.14,15 While the downstream effects or health consequences of these microbiota changes are unknown, it is not advisable to restrict FODMAPs unnecessarily. The co‐administration of a multi-strain probiotic may also help to modulate effects16 and re-introduction of FODMAPs via fructan supplementation may attenuate some of these changes.17

Some studies have assessed nutritional adequacy of the low FODMAP diet and have highlighted lower energy, calcium, and fiber intakes. Therefore, particular attention should be paid towards adequate calcium (i.e., encourage consumption of lactose-free options and non-diary sources of calcium), vegetarian diets (i.e., encourage consumption of soy products, eggs, and other high protein grains such as quinoa), and any overlapping health conditions (i.e., ensure grains and cereal alternatives are consumed by those with diabetes).

However, the low FODMAP diet, when delivered by a specialist dietitian, can be of high dietary diversity,18 and long-term “adapted FODMAP“ diets have been shown to be nutritionally adequate.13 Adjunct therapies including the use of enzymes (i.e., lactase for lactose or α-galactosidase for GOS) can help reduce symptoms.19

Complexities of FODMAPs include their co-existence with many other foods including other non-digestible carbohydrates (i.e., starch polysaccharides) and the overlap of wheat fructans with gluten proteins; especially in cases of patients self-reporting non-celiac gluten/wheat sensitivity (NCGS). There is often confusion in understanding the difference between gluten-free and low FODMAP diets. The wheat restriction on a low FODMAP diet is not as strict as the gluten restriction required for celiac disease and fructans rather than gluten has been shown to induce symptoms for the suggested NCGS entity,20 further highlighting the low FODMAP diet as the recommended approach in IBS and NCGS.21

In cases when the low FODMAP diet has led to inadequate symptom response, other dietary approaches can be attempted. Predictors of response continue to be researched, where likely candidates are bacterial profiles, including fecal volatile organic compounds22 or metabolomic activity.23

There is convincing clinical evidence for utilizing the low FODMAP diet as a treatment strategy for symptoms in patients with IBS. The diet should be implemented in symptomatic patients only and should be led by a trained gastroenterology dietitian with mechanistic understanding of absorptive capacities and awareness of the patient’s severity of visceral hypersensitivity. There should be interpretation of comprehensive foods lists, acknowledging that many foods have more than 1 FODMAP and that individual tolerance levels for each FODMAP will vary among patients. Long-term dietary restriction is not encouraged, and both reintroduction and liberalization of the diet should continue while maintaining symptom control. Despite the low FODMAP diet commonly being utilized for weight loss, it is not suitable for this purpose. Additionally, for the healthy person, there are many health benefits of consuming high FODMAP, prebiotic foods.