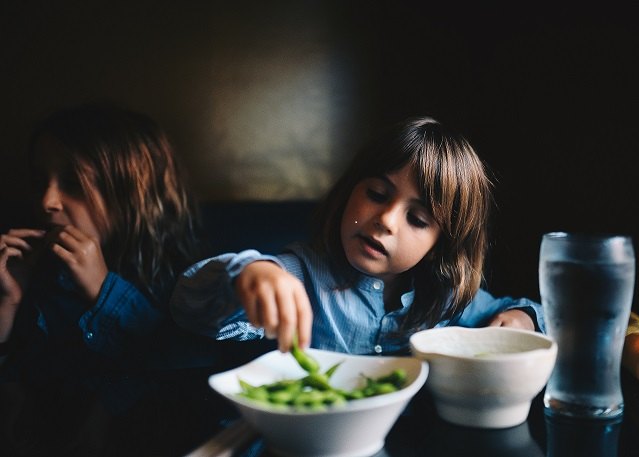 The soybean is a nutrient-dense food that offers many health benefits that can contribute to the growth and development of children. Soyfoods can contribute several important nutrients to the diets of children such as protein, essential fatty acids, calcium, potassium, and folate.1-3

As in adults, soy protein lowers circulating cholesterol levels in children and there is intriguing evidence indicating the consumption of as little as 1 serving of soy per day during childhood may markedly reduce risk of developing breast cancer later in life.1 Epidemiological research involving Asian and Seventh-day Adventist populations as well as clinical research supports the safety of soyfoods.1

Soyfoods are an increasingly popular food choice in the United States. Americans enjoy traditional Asian soyfoods such as miso, natto, tempeh, edamame, and tofu and also consume soy ingredients including isolated soy protein, soy protein concentrate, and soy flour/textured vegetable protein as a component of soy-based meat and dairy analogues.1 With the increasing interest among Americans in plant-based diets, vegan/vegetarian eating patterns, and non-animal protein sources, the topic of soy and how it can positively contribute to children’s diets has become increasingly relevant. An estimated 6% of young adults ages 18 to 34 identify as vegetarian.4 Many of these young adults are becoming parents, which results in an increased interest in how soy can be incorporated into the diets of children.

ISSUES OF CONCERN TO PARENTS

Although the research is limited, the evidence indicates that soy does not affect circulating hormone levels.1

Children are entering puberty earlier in life throughout much of the world.  This development is giving rise to considerable concern. Factors potentially contributing to early menarche include increasing obesity and increased animal protein intake. Because soyfoods contain isoflavones, there is interest in determining whether soy intake impacts onset of menarche. While there is limited research on this topic, a study involving 327 U.S. Seventh-day Adventist girls showed that even very high intakes of soy protein-containing foods (24 servings/week) is not associated with the age of menses onset.5

Epidemiological studies show that soy consumption early in life is associated with a lower risk of breast cancer in adulthood.1 It appears that isoflavone exposure early in life causes cells in the developing breast to become permanently less likely to be transformed into cancer cells.6

Soy protein is 1 of the 8 primary allergens in the United States that collectively account for 90% of all food-allergic reactions.10 Recent research indicates that approximately 1 out of every 200 children and adolescents are allergic to soy protein, although this estimate is based on self-reported data and may, therefore, be inflated.11 Furthermore, it is estimated that approximately 70% of children will outgrow their soy allergy by age 10.12

Newer guidance on prevention of food allergies suggests that allergenic foods, including soy, can be introduced to infants along with other solid foods between 6 and 11 months.13 The American Academy of Allergy, Asthma and Immunology (AAAAI) advises that “highly allergenic complementary foods may be introduced between 4 and 6 months of age once a few typical complementary foods have been fed and tolerated.” The AAAAI cites emerging data encouraging early introduction of highly allergenic foods to possibly prevent food allergy in infants. Parents should discuss the introduction of highly allergenic foods with their healthcare provider, particularly if there is a strong family history of food allergy.

From a practical point of view, soyfoods most suitable for 6 to12-month-old infants include tofu and soy-based yogurt (as high fat as available). Soyfoods with high levels of sodium should be avoided the first year. Infants and toddlers ages 6 months to 3 years should avoid items that pose a choking risk such as edamame or soy nuts.

USE OF SOY INFANT FORMULAS

Human breast milk remains the gold standard for nourishing infants and should be promoted and supported as the ideal source of infant nutrition whenever possible. Infant formulas provide an adequate substitute for infant nutrition when breastfeeding is not feasible. Among formula-fed infants, soy infant formula (SIF) comprises approximately 11.6% of the total.14 There is little difference in growth patterns between infants fed cow’s milk-based formulas or SIF.15

The American Academy of Pediatrics (AAP) advises SIF use when strict dietary lactose elimination is required in cases of infants with galactosemia or primary lactase deficiency (an extremely rare condition). SIF also provides a safe alternative for vegan infants. SIF is not designed or recommended for preterm infants.15

Soyfoods can contribute several important nutrients to the diet, such as folate and potassium, and are unique among legumes for their higher protein and fat content and lower carbohydrate content.2

While most plant-based proteins are low in 1 or more essential amino acids, this is not the case for soyfoods as they are sources of high-quality protein. Protein digestibility-corrected amino acid scores for soy protein range from approximately 0.9 to 1.0, depending on the source of the soyfood, making soy protein comparable in quality to animal protein.1,3

Children may benefit from additional protein beyond the Recommended Daily Allowance (RDA). In one study, when protein needs were directly measured in children using stable isotopes, the protein requirement was more than 50% higher than the RDA.16 Protein has been found to be more satiating than the other macronutrients,17 which is a factor in obesity prevention, and adequate protein intake in youth enhances bone mineral content.18

Soybeans are a good source of several vitamins and minerals -- many of which are critical in the growing child. Soy contains folate, which is important during periods of rapid cell division. Soy is also a good source of other B vitamins, potassium, magnesium, and iron. For instance, ½ cup of cooked soybeans provides greater than 10% of the Daily Value (DV) for thiamine, riboflavin, vitamin B6, folate, potassium, magnesium, and selenium, and also provides greater than 20% of the DV for copper, iron, manganese, phosphorus, and molybdenum. Specific soyfoods will vary in nutrient content depending on the form and type of processing. For example, tofu that is set with a calcium salt can supply as much as 27% of the DV for calcium per 3oz. serving.19

Iron deficiency remains a problem in American children. More than 7% of children ages 1 to 5 are reported to have deficient total body iron as calculated by serum ferritin and soluble transferrin receptor concentrations.20 While soy contains phytates, which are thought to interfere with iron absorption, 2 areas of newer research show iron from soy is absorbed at a much higher rate than once thought. One, much of the iron in soy is present in the form of ferritin, which may be resistant to inhibitors of iron absorption. 21 Two, there appears to be adaptation to the inhibitory effects of phytates on iron absorption.22 In other words, acute studies suggest that regular soy consumption can mitigate the inhibitory effect of phytate on iron absorption.

A hot topic in human nutrition, the human microbiome is known to be influenced by dietary factors. The microbiome refers to the trillions of gut bacteria which play a crucial role in maintaining immune and metabolic homeostasis and protect against pathogens.25

Unlike most legumes, soybeans are high in fat, with approximately 40% of the calories derived from this macronutrient. Soybean oil is heart-healthy as it is comprised of 12% saturated fat, 29% monounsaturated fat, and 59% polyunsaturated fat.1 Soybean oil contributes greater than 40% of the U.S. intake of the essential fatty acids, the omega-6 fatty acid linoleic acid and the omega-3 fatty acid alpha-linolenic acid.29  In 2017, the FDA approved a qualified health claim for soybean oil and heart disease based on its cholesterol-lowering effect.

Research on the human microbiome is an emerging science, focusing on the composition of the trillions of bacteria present in the gut. Much of this research is focused on the effects of probiotics and prebiotics on such bacteria.

Probiotics are live microorganisms that confer a health benefit to the host. Several strains of bifidobacteria and lactobacillus are commonly present in fermented foods such as miso, natto, tempeh, yogurt, kefir, sauerkraut, and kombucha.

Prebiotics are substances that are non-digestible by humans, yet serve as food for the gut microbiota. Prebiotics such as inulin and oligosaccharides are fermented and digested by some of the microorganisms present in the intestinal tract. Certain soyfoods, legumes, vegetables, fruits, and whole grains contain prebiotics.28

Connie Liakos, MS, RDN, CSSD, LD, is a pediatric and sports dietitian in Portland, Oregon. She teaches classes and counsels children, teens, and families from birth through college age. She has authored 3 books, including the bestselling How to Teach Nutrition to Kids, 4th ed. Find out more about Connie at nutritionforkids.com.