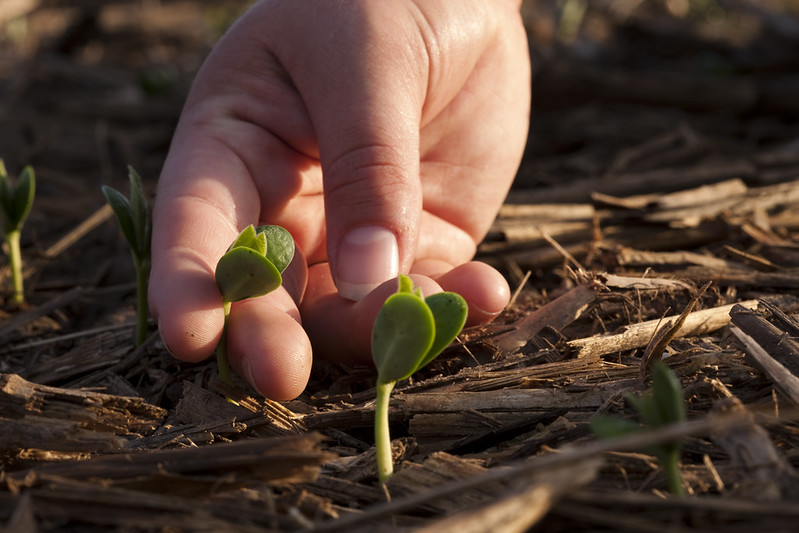 The foods we eat impact our environment in multiple ways; one of the most important is via greenhouse gas emissions (GHGE). These include carbon dioxide, methane, and nitrous oxide. The importance of considering the environmental impact of food aligns with the position of the Society for Nutrition Education and Behavior, which is that environmental sustainability should factor into dietary guidance at both the individual and policy level.1

The scientific community and health agencies throughout the world increasingly emphasize the challenge of producing sufficient protein in a sustainable manner to meet the needs of a growing global population, which is expected to reach more than 9 billion by 2050. Although methods for determining the environmental impact of our food choices will undoubtedly continue to evolve, substantial evidence indicates U.S. soybeans are well-suited to meet the protein challenge.

Soybeans, like all legumes, can “fix nitrogen” because of the bacterial symbionts (rhizobia) that inhabit nodules on their roots. Nitrogen fixation refers to the process by which molecular nitrogen in the air is converted into ammonia (NH3) or related nitrogenous compounds in soil. One reason soybeans are typically rotated with other crops, such as corn, is to reduce the amount of fertilizer needed for the primary and alternate crop. Estimates are that half the nitrogen used for crop fertilization is lost into the environment, creating environmental concerns due to entry into surface and ground-water.2 This loss can lead to human health issues, eutrophicated watersheds, and coastal waters with anoxic deep water and subsequently diminished abundance and biodiversity of bottom fauna.3

Compared to nearly all other protein sources, legumes have been shown to have a low global warming potential (GWP), defined as the amount of energy the emissions of 1 ton of a gas will absorb over a given period of time, relative to the emissions of 1 ton of carbon dioxide (CO2).5-7   Although this depends, in part, upon the management of the agro-ecosystem used (e.g., mono cropping vs. conservation agriculture).8 In 2011, Gonzalez et al.9 determined that of the 22 plant and animal protein sources evaluated, soybeans were the most efficiently produced and provided the most protein (g) per GHGE. There are various ways the GWP of a food can be expressed, for example, per gram, per kcal, or per gram protein. Tessari et al.10 emphasized that when considering the environmental impact of foods, it is important to factor in nutritional value and, in particular, indispensable amino acid content. When this metric was used, there was little difference between animal and plant protein sources, except for soybeans, which exhibited the smallest environmental footprint.

Since most people consume foods made from soybeans, rather than directly consuming the bean, it is necessary to consider the impact of the additional processing steps when evaluating the environmental impact of soyfoods. The results of considerable research show that traditional Asian soyfoods, like soybeans, receive high marks for their protein content and low environmental impact.11-16

Finally, the environmental impact of soybean production is often portrayed negatively due to its link with deforestation in South America.17-21 However, growing soybeans in the United States, the second largest producer of soybeans in the world, does not lead to deforestation. Also, from a practical perspective, it is notable that the acreage devoted to soybean production dwarfs that of other dry beans,22 and soybeans produce the highest protein yield per hectare.22 Therefore, soybeans are well positioned to meet the future global protein need. Especially so, because they can be incorporated into varying cuisines from traditional Asian soyfoods to modern soyfoods such as meat and dairy analogues based on soy protein ingredients which include soy protein isolate, soy protein concentrate, and soy flour.